In my years spent traversing the war-torn countries made of so much kitty litter, the contrast with our great nation has become sharp enough to cut flesh. The value of human life, the treatment of women and children, the adherence to (or lack of) order and laws, preparation of food, and every other facet of life is a night-and-day difference. I and those around me have spent many an hour conversing about how fortunate and happy we are to be born into the U-S-of-A.

Spattered into those conversations is the inevitable realization that sometimes, just maybe, other countries get things right that are lacking in our own homeland.

I was recently asked the difference between Americans and “everyone else,” and while I could have waxed poetic about keywords like our freedoms, the benefits of capitalism, or the inevitable American “can-do” attitude, I chose something else. There was one thing I realized that we do more than any other country I have visited.

Should we ever entertain the notion of changing the motto on our currency from “E Pluribus Unum” to something that better reflects our current values, my vast Google Translate skills have brought to me a possible alternative:

Let Someone Else Do It.

A man’s ability to do things for himself is being handed, gladly, to outside parties in our culture. The Afghan in Musah Quelah and the Iraqi in Ar Rutbah has no such ability, and thus is often in a more permanent state of self-reliance. He may not be able to get a particular job done as well as a more polished, more specialized corporation in the States, but he often can still get the job somewhat done with the ten digits on his own hands.

An easy example is in automotive repair. While there are many auto repair facilities in third-world nations, it is not at all uncommon to see someone driving around on a vehicle he has repaired with scrap wire, some tape, and a goat hoof. It is rarely the prettiest thing in the world, but by thunder the driver can keep it running!

We, on the other hand, are increasingly unable to fix the smallest problems with vehicles or appliances, preferring instead to buy fancier, more high-tech machines rather than ones with user maintenance in mind. We have outsourced that ability to other, seemingly more capable entities. Indeed, any job that is deemed unsavory or tedious is sent to another party.

The differences only begin there and seem to be digging like a tick deeper and deeper into the flesh of our very culture.

In Jack Donovan’s essay, “Violence Is Golden,” he asserts that we outsource our violence. Whereas previous generations of Americans (and every generation of those living in third-world nations) considered personal protection a very normal thing to do themselves, we drive it as far away as possible. The increasing trend is to hand the very responsibility of protecting our own lives to the police, and thus we are removed enough to blame them when they use that state-sponsored violence in ways we don’t like. Our culture has banished violence to the realm of the professional military, and we become lotus eaters doped up on our Soma-like smartphones and masturbatory political discourse. We are free to, and content with, critiquing those actions in Syria, Afghanistan or Iraq based on which politician is directing it.

Even our government, the owner of the “monopoly on violence,” outsources it to private companies. Why would a member of the State Department learn to keep himself safe when he can more easily give the job to a brutish, tattooed thug in a Velcro patch hat? Having placed the responsibility (as well as the consequences) of violence upon the contractor, he can spend his days speaking of how peaceful his chosen third-world country is, and how his protectors are largely unnecessary. He can even do this from the safety of his armored limo as he drives to his next venue.

We find it easy to speak out against the slavery that was once a large part of our nation, but we haven’t really abolished it. We have only outsourced that slavery to Asian nations, where their people work in subhuman conditions to make. . . well, everything we use. Ignoring this glaring discrepancy allows us to condemn our slave-owning forefathers with impunity, often utilizing our Chinese smartphone to do just that.

We outsource our morality to politicians and votes, content to believe that a vote in the right direction is all that is needed to feed the hungry, protect the weak, and bring up the downtrodden. After all, why do the undesirable work of getting to know individual people in poverty when we can vote for a politician who promises to rob the rich? “Support” of the correct politicians allows the all-wise government to collect money from us ignorant subjects and divvy it out (wisely, no doubt) to those in need. We are then able to keep from getting our hands dirty helping those icky homeless people, giving up the virtue of generosity to others.

It does not stop there, dear reader.

We continue this outsourcing of morality by hanging our hopes and dreams on said politicians. When a politician from “the other side” is in power, we place every fault and blame on his singular frame. We say to all who will listen, “If only our guy could have gotten in office, everything would have been ok.” When our guy can’t turn the mountainous bureaucracy around in a matter of months and fix all of our problems, we call him a “shill” or a “turncoat.” All injustices must be the fault of the “elites,” and never ours. After all, we’re “the little guy,” and they work for us! None of it is our fault, therefore we have no responsibility to act.

Let us continue to give up our decency and basic human responsibilities!

Is there a substance, object, or action that is distasteful to you?

Do you hate drugs? Do they offend your developed First-World sensibilities? By all means, petition the likely ignorant (and possibly closet drug-using) lawmakers to ban them! Why go through the hassle of not buying the drug, or the trouble of raising your children to avoid them? Let someone else do it for you! Let that responsibility fall on the police, who can arrest people of whom you disapprove! Let your morality be assuaged by the police state and allow them to enforce your ideals of conscience!

Don’t like guns, or the people that use them? Why educate yourself on firearms, or learn to defend yourself? Let someone else take care of your own flesh! Spread your fear to lawmakers who are conveniently waiting, all too happy to utilize manufactured panic to make their subjects less dangerous! Let us then say the phrase, “Not one more,” and watch a crying TV personality agree with our pain. This is, after all, much more palatable than facing the shameful truth that we were either being dumbasses, or that maybe we raised a stupid kid, or we left our gun unattended. We can outsource the blame of our own actions!

Don’t like sexuality in the media? Let’s be honest, it’s too much work to turn off the fucking TV, or to keep tabs on what our children watch. We need Netflix to raise our kids so that we can have time to surf social media for hours. The FCC is probably better at parenting than us anyway, and doping our kids up on the narcotic, pacifying effects of entertainment-on-demand is better than actually engaging with our children.

Don’t like offensive content on social media? Why leave that private Facebook group (or social media altogether) when you can allow The Zuck to slam those sumbitches for having the absolute gall to have a differing opinion?

While we’re on the subject of social media, let’s talk about how we throw every ounce of our personal identity, activism, and projected beliefs into that electronic netherworld.

Do you feel deep sorrow for the victims of the latest tragedy in a country you’ve never visited? Forget learning the names of the victims! You’re not really sad unless you change your profile pic.  Are you even a veteran if you’ve never typed a feel-bad-for-my-service post, complete with an edgy hashtag? Nope, you might as well be #UberPOG.

What about our cultural identities and community ties? Let’s outsource that to professional sports teams’ paraphernalia, where for a reasonably low fee we can buy all the accoutrement of a member of a real tribe!  Lucky for us, we can enter a tribe with ready-made mores and customs, bought and sold cheaply for the price of a jersey, a window decal, and some sportsball tickets. We paint our faces and adorn our bodies with the names of stronger, faster, richer men. We “identify” as fans so strongly we call ourselves a “[insert sports team] Nation.” We adore and worship players who cannot hear our impotent shouts at the TV, who can’t name five of us. We bitch when they kneel during the National Anthem (during which we’re likely talking and drinking beer anyway), and we can name their stats quicker than the ages of our children. They can be bought and sold (sorry, traded) by a corporation intent on making money from our carefully cultivated rivalry, a corporation perfectly willing to suppress American words and ideas in favor of money from China.

Don’t like sports? Me neither. Forget jerseys and mascots, just buy a Che Guevara shirt, a “Feel The Bern” sticker, a MAGA hat, a Star Trek uniform, a Mjolnir necklace, a Jesus Fish decal, or any other kind of trappings to parade just what niche of consumer we are.

What is the end state? What happens when we are so consumed with consuming, when we have happily given up every ounce of our basic human responsibilities? While the dirt farmer from Crapistan looks on impassively from his tight-knit village, we become an atomized people. While he lives his life with his own hands and those of his people, we continue our prosperous slide into the prophetic future of the movie WALL-E; busy, entertained, fat, stupid, and vacant.

We are fast becoming nothing more than socially acceptable LARPers, bereft of a true identity, screaming into a thickening wind. We are often so devoid of actual meaning that we try to buy our purpose rather than create a decent culture. 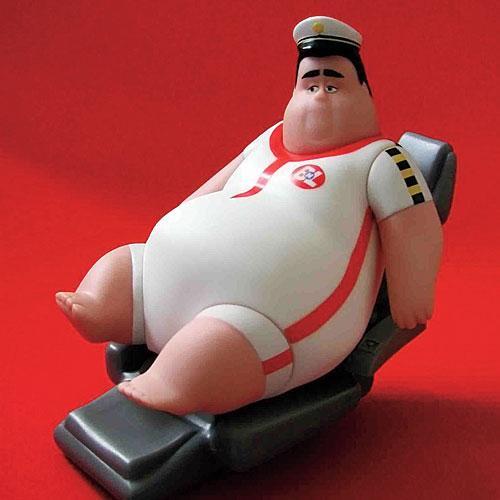 Cokie has been a USMC Scout Sniper, a PMC, and a National Guard Medic. He loves "Yo Momma" jokes, and is often intrigued by the complexities of the social hierarchy of Smurfs. He hates the movie "Pocahontas," and with good reason. Don't get him started.
He can be found in tree stands across the Midwest, wishing he was good at deer hunting. @cokie_actual