Achilles, the most renowned warrior in Western culture. The hero of the Trojan War. The monster.

On the off chance you have no idea who Achilles is, let me sum up. Achilles was born to Thetis, a goddess, and Peleus, a mortal king. Achilles was almost a god (the offspring of two gods) but Prometheus prophesied that Achilles would be greater than his father, so Zeus and Poseidon, who were both pushing up on Thetis were like, “nah, give her to a mortal.” That’s how Peleus, a good man, a king, and famous warrior in his own right, bagged a hot goddess and sired a demigod. A second prophecy about Achilles said that he would live long and die in obscurity or win great fame as a warrior and die young. We know which choice he made.

Achilles was fast, good looking, and had an ash spear that he used to keep Hades stocked with fresh shades (what the Greeks believed you became in the afterlife). But he had a temper.

And not just that he had a temper, but he had a serious problem with rage. Warriors, does this sound familiar?

Think about this. The first line of the Iliad, one of the oldest and most important pieces of Western literature, opens with “Sing, Goddess of the rage of Achilles.” The Iliad was composed around 850 B.C., making it nearly 3,000 years old. And how is the greatest warrior remembered these past millennia? By his rage.

Warriors, what will your legacy be?

Now that I am old, I think about legacy a lot. I have a son. He has followed my footsteps into the military. And above my desk is a laminated picture he drew when he was a young boy. Said picture is a portrait of me in uniform, holding a weapon. But how did he draw my face? With what emotion? I can only find one word. Rage. Anger is one thing. A warrior can be righteously angry. In fact, our better nature should be angry at some of the things we have seen and fought against. Anger is a natural reaction, I think, in a lot of ways. But when unchecked and allowed to become rage? Rage is for monsters, beasts, and men (and women) who have severed their ties to humanity.

Achilles is our case in point of this severed tie to humanity. When Agamemnon takes Briseis, Achilles’s battle prize, Achilles’s pride is wounded, and he becomes so enraged at leadership that he withdraws from the fighting. Bad leadership is as old as warfighting itself—again we have the Iliad as proof of that—but withdrawing from the fight? Leaving his brothers to die? Would we do that? I am not overstating the case here, either. Achilles was instrumental in winning the Trojan war. Prophecy said that without Achilles many Greeks would die and the war would be lost. And this brings the rest of that the Iliad’s first line about rage, “the accursed rage that brought great suffering to the Achaeans.” 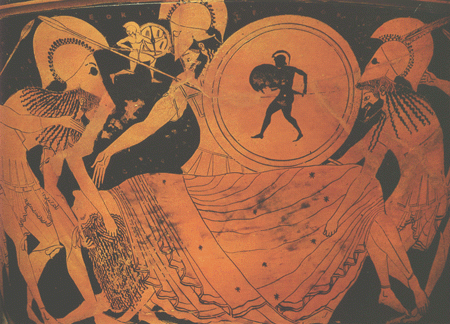 Let that sink in for a minute.

His rage led to the death of his comrades. In fact, Achilles even begged his mother to ask Zeus to let the Trojans kill many Greeks as punishment for the insult. Where is the honor and humanity in that request? How many of his fellow men died who didn’t have to?

Of course, the greatest example of the casualties Achilles’s rage caused is Patroclus. Patroclus, Achilles’s closest companion,  who felt Achilles was behaving dishonorably—and called him out for it—who felt that even seeing Achilles on the field of battle would bolster morale, who took Achilles’s armor, and was killed by Hector.

And does Achilles take responsibility for Patroclus and the other Greek deaths? No. He blames Hector. Hector, the good man. The man who was defending his homeland. Who was torn between duty to his wife and son and to his country. Hector, who fought honorably.

Refusing to take responsibility for his actions and lack of emotional control is one of Achilles’s greatest problems, to be honest. At first he blames Agamemnon for starting the trouble, then he blames Hector. Never once does Achilles say, “my bad, I messed up. I overreacted to someone else’s actions.” And so, he keeps distancing himself from humanity becoming more and more monstrous as he stews in his rage. And this, warriors, is his greatest sin. Achilles becomes so entrenched in his rage, he holds on to his rage so tightly, that he severs the strongest tie to humanity—the quality that binds all humans. Achilles loses his compassion.

Compassion is one of the most important and undervalued qualities of a warrior. Look, there are a lot of evil fucking people in the world and they need to be put down. I am not advocating a dilution of the warrior culture or giving monsters a pass. Quite the opposite. But we have to remember to keep our compassion or else, what’s the point?

We know the story. Achilles kills Hector. You could argue, “hey it’s war. Shit happens.” True, I guess. But what he does next marks Achilles’s transition to full monster. He doesn’t just kill Hector in a rage, he desecrates the body and refuses to let Priam, the Trojan king and Hector’s father, bury his son.

War is war, war is hell, people die, blah blah blah. The one cultural norm of the time was that enemies who met and fought honorably were treated with honor and dignity. By depriving Priam the right to bury his son, Achilles breaks the unspoken covenant of warriors, of humans—respect for our dead.

As monstrous as he is, Achilles is not beyond redemption. Achilles relents and allows Priam to bury his son. Achilles even promises funeral game for nine days—a cultural norm and joyous occasion to celebrate the deaths of comrades—before Hector’s burial on the tenth day.

Achilles regains his compassion and rejoins society. He comes home to humanity.

Rage is real. I have struggled with it. You probably have, too. Maybe some of us have even become the monsters we fight. And remained the monster at home.

Like I said earlier, I think about these things a lot more than I used to in my old age, especially as I watch my young warrior son struggle against peace time. Sitting here writing this, I think of the times where I know I lost my compassion, where I was consumed with rage, and wish someone in leadership had reminded me that compassion is a warrior virtue, too.

And so, as an old timer, and like I told my son once: Strive to keep the monster at bay, check your rage, and when you fail, and you become the monster, remember that compassion is a good thing and that’s how you find your way home.

Beelz (short for Beelzebub) was a Greenside RP who loved doing hood rat shit with his friends at units in 1MARDIV until he had to sit behind a desk. He decided to leave the service and use the Post 9/11 GI Bill to avoid that desk. He holds a BFA and MFA from UNC Wilmington, where he is now a part time lecturer in the Creative Writing Department...where he sits behind a desk.
He is a firm believer in the necessity of the arts in the life of a warrior—ask him about it sometime. His work has appeared in The Sun and Fourth Genre.