Crossing the Bosphorus toward Taksim Square was a drastic change of scenery.  Older, rushed, and more feeble tourists stayed behind in the Sultanahmet District, as did many of the hawkers who preyed upon them.  The Taksim District had a different kind of traveler, the type who wanted to go beyond the typical tourist scenery and experience Istanbul’s modern, authentic, and grittier side.  Nightclubs, restaurants, and shops selling real goods—not the cheap Chinese souvenir junk being touted to tourists in Sultanahmet- lined the streets.  Gangs of men dressed in all black, looking sharp and dangerous, hovered in packs around the nightlife scenes, and LGBTQ individuals made a more comfortable presence in the area, far removed from the conservative mosques and Dervishes on the other side of the Bosphorus.

Around the time of my visit, in the summer of 2015, gay marriage became federally legal in the USA.  This sparked a movement of LGBTQ protests around the world, including Istanbul, where I’d been when conservative Turkish police attempted to crack down on the protestors in Taksim Square.  In one of the most satisfying moments of irony, police used water cannons to spray the Pride protestors, and accidentally created a refractive rainbow in the mist which hovered above those standing up for their rights, and those who oppressed them.  Photos of the phenomena were printed and spread across the city with many believing that God, Allah, or the Divine Luminescence was on their side.  History was being made, and it was fun to experience a small part of it. 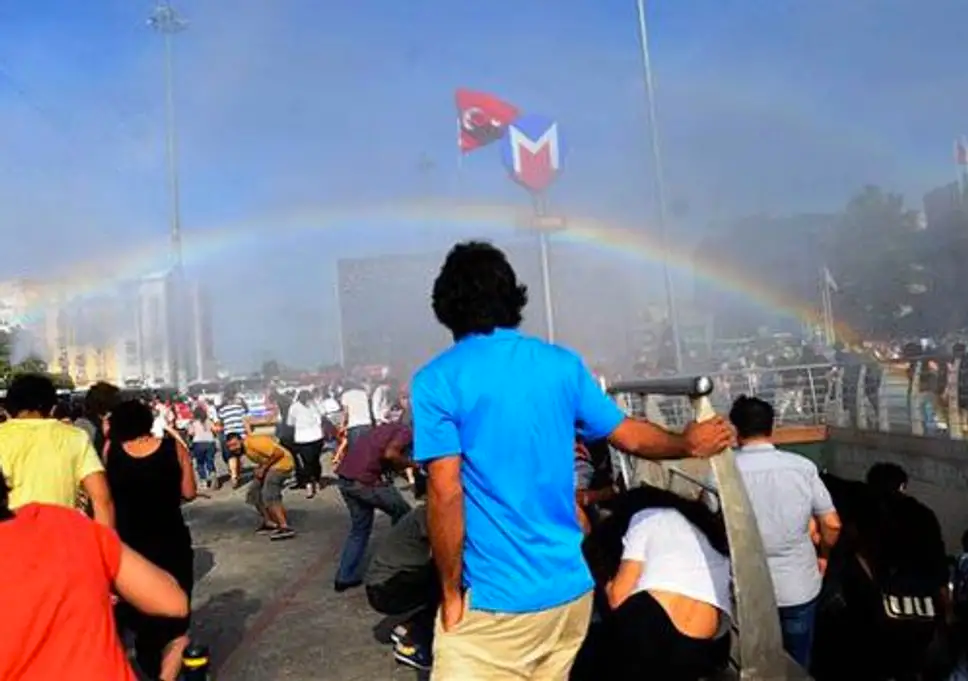 Our group found a s restaurant that served delicious food on a beautiful street just off Istiklal Boulevard, near the heavily guarded Russian consulate. When one of our group recognized a friend from another table, we sat next to them and started drinks and conversation.  The Australians in the other group wanted to party, so we went to a rooftop nightclub and got absolutely smashed as a combination of modern hip-hop mixed with a MiddleEastern flare whistled through overhead speakers.  The two Australians from the other group were crushing on a beautiful dark-haired girl, each trying to woo her.  When she made her interest in another man clear, the Australians decided it was a good idea to go all pyromaniac on the nightclub floor.  They lit a powerful liquor, added some napkins, danced through the flame, then were escorted out by the bouncers who put out the small fire.  The rest of us danced and had fun until one of the girls from my hostel, a Peace Corps volunteer, got her bag stolen, which contained her passport, cards, and iPad.  I felt sorry for her and offered to walk her home.

One of the most prominent features on the other side of the Bosphorus is the Galata Tower, or Galata Tor.  It was built to control ship traffic in the strait by means of a giant sea chain connected to the other side.  If unfriendly military ships or merchants tried to cross without paying tariffs, the chain was tightened and lifted out of the sea, stopping their attempt to pass. #YouShallNotPass #JustGandalfThings #JustRIThings While exploring off the beaten path, the gang and I ran into several seedy curbside “used electronics” shops, full of goods stolen from soft target tourists and sold at low prices.  I also saw this: 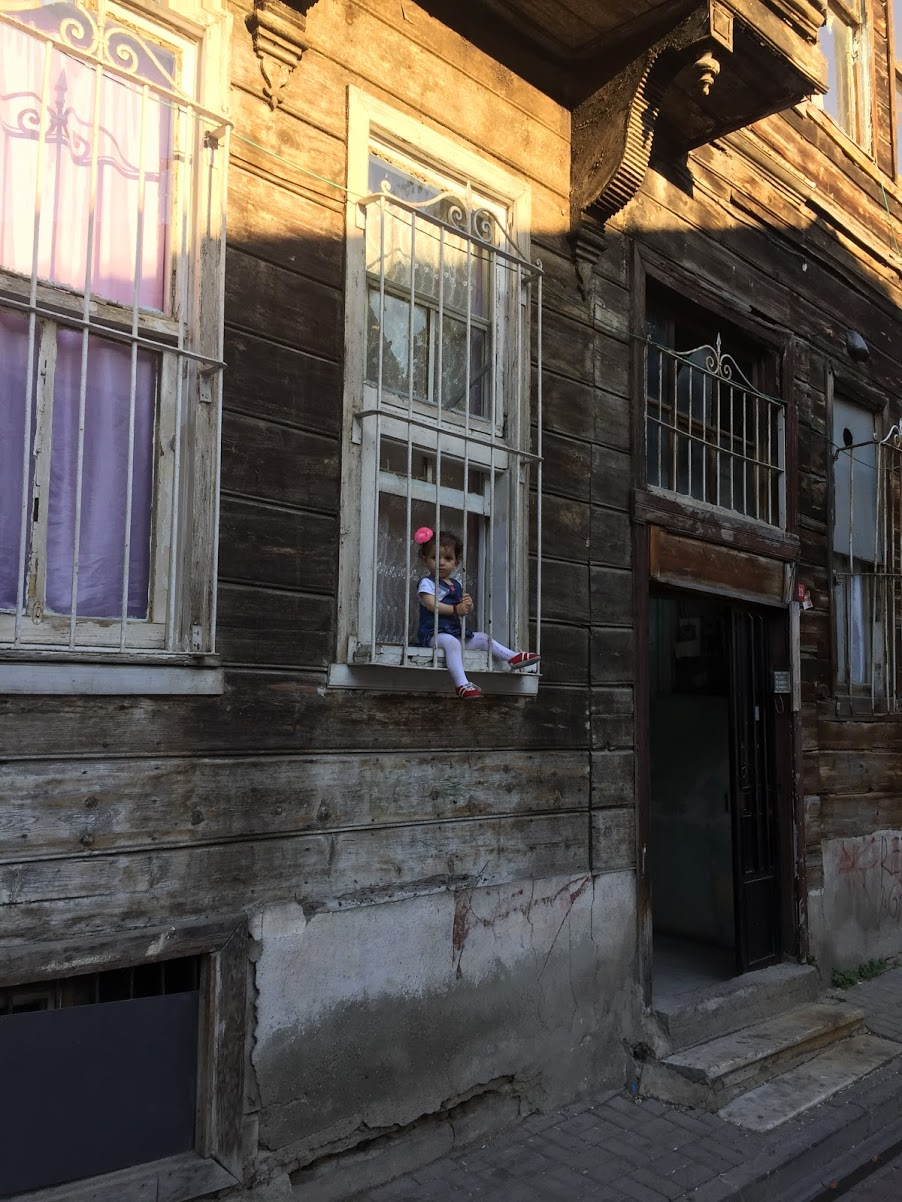 While Taksim Square seemed to have great nightlife, food and entertainment, the Princes’ Islands, just a quick ferry over, take you a step back in time in what felt like a frontier island of Victorian Europe. There are no cars allowed on the Princes’ Islands. Horses, boats, and carriages are the method of travel.  The Princes’ Islands seem to be an overlooked treasure of Istanbul and should not be missed.

Now, I thought the Asian side of the Bosphorus was overrated and less exciting than Sultanahmet and Taksim.  The saving grace, however, was some of the best food I’ve had in my entire life.  There’s a restaurant called Ciya Sofrasi which serves traditional Turkish cuisine with a twist.  The chef made Kebabs that were broiled with cherries giving them a sweet, tangy, yet spicy flavor.  The sides complimented the meal well.  It was incredibly unique.  I’d never had anything like it before or since.

I saw a lot of scams in all parts of Istanbul, so be on the lookout. #stayfrosty #headonaswivel The most common one I saw was not unique to the city.  “Money changers” will try and convince soft-target tourists to change with them and offer more competitive exchange rates than the banks, but will give you worthless Bulgarian dollars instead of Turkish Lira. The Lira seems to be volatile and fluctuated more than other currencies while I was there. Stay familiar with the exchange rates of Dollars, Euro, and Lira, and make sure you’re getting what you pay for, even at the more legit looking exchange counters.  Another scam I read about, then had someone actually try on me, is to drop a wallet or purse near you. Preying on your politeness, when you pick it up and give it back, they look inside and ask what you did with the money. I’m glad I read about this scam beforehand. I took part in one scam to see what it’s like and got a free cup of green apple tea. A Turkish Carpet shop owner invited me into his store wearing the big but disingenuous smile of a scam artist. He and his staff acted very friendly and welcoming, offering me tea, then trying to sell me a Turkish carpet for the equivalent of a thousand dollars. When I declined, they brought out a smaller doormat sized carpet for a hundred dollars. I declined again and the shop owner brought out a mousepad sized carpet, smiling wide, for thirty dollars. I politely declined yet again, and he shifted his mood to furious, raising his voice, attempting to get drill-sergeant on me, telling me I’d insulted him and his staff. I laughed in his face and told him I knew it was a scam from the start, and that he should reevaluate his life. His staff were not expecting this and looked bewildered. I showed myself out and left a small coin for the tea.  One more common scam unique to Istanbul is that people will try and sell young men (and women) on the authentic Turkish Bath experience with brochures containing women dressed like the sultan’s harem and belly dancer girls. They promise the men that the masseuses are beautiful and will rub every inch of you. When you get to the bath house, there’s no women to be seen. You pay for the bath and scrub, and some big fat hairy sweaty guy takes care of you. Several of my hostel mates fell for this scam, and as far as I know, there isn’t a single co-ed or haremesque bathhouse in all of Istanbul. Check online for newer clever scams before you go.

Outside Istanbul, Turkey has even more to offer. Cappadocia’s sandstone dome houses and air balloon show looks out of this world. The white Pamukkale Hot Springs look frozen and frigid but are actually very warm. It’s easy for people to get overwhelmed by the amazingness of Istanbul and forget about the rest of the country. 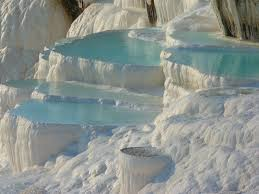 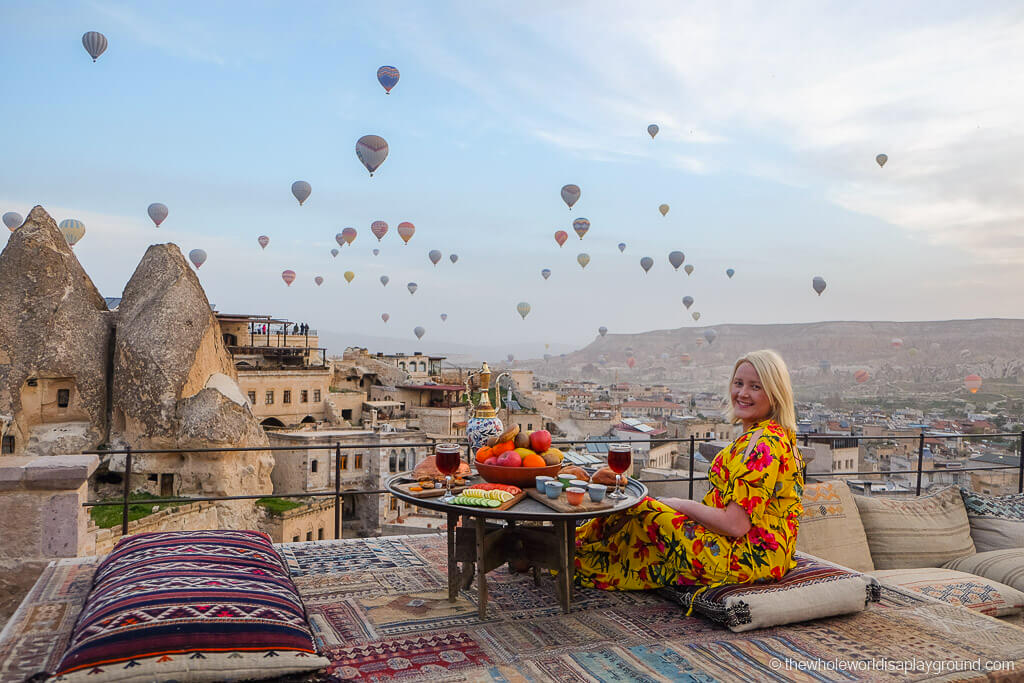 There’s so much I had to leave out in this two-part story on Istanbul, one of my favorite cities I’ve ever traveled to. Seeing the intercontinental city as a bridge between religions and cultures through time was significant. I learned a lot about the world while also managing to enjoy myself with great company. I encourage anyone traveling to Europe to look up flights and add amazing Istanbul to their itinerary. Book Review: All the Shah’s Men

THE DOLLARS AND SENSE OF WRITING