In light of recent events, and the constant evolution of US-Iranian tensions, understanding their origins should be a priority for military leaders and critical thinkers. In a chaotic era of poor, cowardly leadership and “subject matter experts” who never wore the uniform, but shout hyper-opinionated word vomit like John Bolton on a cocaine-fueled twitter storm, sifting through the rubble for meaningful, reliable content becomes difficult. That’s why I’d like to share what I believe to be the best, digestible book on the first modern Iranian revolution–the revolution that the US started and the Islamic Regime exploited.

All the Shah’s Men by Stephen Kinzer, which was on the recommended reading list at the Defense Language Institute’s Persian Farsi school, thoroughly details the US-backed overthrow of the democratically elected President of Iran, Mohammad Mossadegh, in 1953. Dr. Masoud Kazemzadeh, an Iranian-American professor of Political Science, writes “[Kinzer’s] book is not a journalistic recounting of events with superficial explanations. Kinzer’s book presents essential information and raises important questions for international-relations scholars interested in U.S. policy towards Iran.”  Kinzer indeed keeps an intense, facts-driven narrative throughout the book, making it easy for readers with a short attention span to stay engaged.

One of Kinzer’s main theses in this book is that the 1953 Iranian coup was orchestrated by Americans, not to counter the Soviet Union’s desire for oil fields and influence in the region, but rather to consume and sell Iranian oil. Kinzer also argues that the players in the 1953 coup were easily able to sell the idea to the West’s staunch anti-communist leaders, Dwight D. Eisenhower and Winston Churchill, while simultaneously organizing the redistribution of resources to Western oil companies. The book was published in the summer of 2003 not long after the invasion of Iraq as America started to gain a reputation for oil wars. 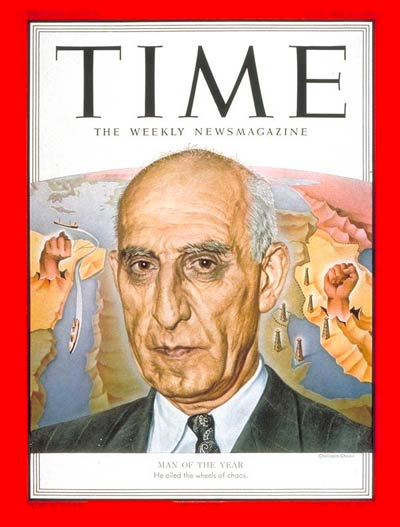 Kinzer’s account goes into great detail, sometimes providing an hour by hour narrative, about the joint CIA-MI6 operation to overthrow the beloved President Mossadegh. Mossadegh was elected on the platform he would nationalize Iranian oil and other natural resources and use the funds to update Iran’s infrastructure and social programs.  A short, fragile man, Mossadegh’s enormous smile, loud laughter, charisma, and charm combined with his passionate speeches on democratic reform and an Iran for the people elevated the elderly aristocrat to presidential status, blowing his opponent out of the water and landing himself a place as Time Magazine’s Man of the Year in 1951.

Predictably, Mossadegh’s nationalization of resources did not sit well with Britain’s Anglo-Iranian Oil Company, who had been paying off political elites to take the oil far below market value. Britain took Iran to the newly established International Court of Justice at The Hague where President Mossadegh led his country’s legal defense from the front. Iran won an enormous victory when the international court found them well within their rights to manage their own state resources. The US and Britain were furious. To protect their interests, the CIA and MI6 assigned Kermit Roosevelt to lead a coup in Iran. Kermit, who was President Theodore Roosevelt’s great grandson, had already orchestrated a successful coup to remove the Egyptian monarchy code named Project Fat Fucker. Kinzer writes about Kermit Roosevelt’s leadership in the Iranian coup, even going into fine details about how he managed his agents and used code words broadcast on public TV shows to mobilize military, police, and street gang forces. As we know, the coup was a success, and Mossadegh was forced to cede to the Western-friendly Shah and his puppet government.

In Iran, the 1953 coup is commonly known as The Day Democracy Died. President Mossadegh was a national hero akin to George Washington and Gandhi, who also stood up to imperial Britain so their countries could flourish. Knowing the implications of the 1953 Iran coup helps makes sense of the anger Iranians felt toward the West when an agitated population of Persian nationalists stormed the American embassy in 1979. Being micromanaged by a puppet Shah with a notorious secret police force, called the Savak, did not sit well with the Iranian people. Any politically aware Iranian citizen knew that their hard-earned democracy was thwarted by the US and Britain. The mullahs played heavily on the CIA coup in 1979 during the Islamic Revolution in Iran, successfully stoking the fires of unrest and uprising in a vulnerable populace. More about the Islamic Revolution of 1979 can be read in the fascinating book A Time to Betray by Reza Kahlili.

Reading All The Shah’s Men helped me understand the justified anger many Iranians feel toward the West, and also reinforced my stance on staying critical of my own government’s actions. In these turbulent political times, knowing as much as we can about the origins of the present situation will help ourselves and others have an educated conversation and possibly even inform decisions that could pave a forward pathway to peace.

Published in 2003 by Wiley and Sons

Book Review: Where They Meet

How to: Employ a combat vet

Offerings to the Enemy

Counterculture at its Finest: No Joy